Vegan apple cinnamon rolls with layers of a brioche-like dough, fresh apple pieces and cinnamon sugar. These rolls combine the classic vegan apple pie with cinnamon rolls and are perfect for Autumn/Fall and Thanksgiving.

For a creamier custard version of these rolls, check out my apple custard cinnamon rolls!

To make these apple cinnamon rolls, you'll around 7 common ingredients including:

Apple, preferably a sweet snacking apple! I recommend chopping the apple finely as larger chunks can remain uncooked and crispy after baking.

If you're feeling adventurous and would like to make cinnamon buns with other types of fruit, check out my blueberry cinnamon rolls or jam donut cinnamon rolls.

Tips for preparing the dough

The dough for these vegan apple cinnamon rolls can be prepared in a stand mixer or in a large mixing bowl.

If you're using a stand mixer, assemble the dough hook attachment and knead the dough for around 5-10 minutes or until the dough is soft and stretchy.

If using a large bowl, mix all ingredients using a wooden spoon. Then invert the dough onto a floured surface and knead for around 10-15 minutes until the dough is smooth and cohesive.

Initially, the dough will feel very sticky. Over time, the kneading will strengthen the gluten in the dough making it less sticky. Ideally, we want to avoid adding flour to the dough as it will make the final rolls drier.

First rise for the dough

Place the kneaded dough in a bowl (it can be the same bowl as you used before) and cover with a tea towel. Let it rise in the bowl for at least 1 hour or until it has doubled in size!

The time it'll take for your dough to double in size will depend on the temperature of your home and the consistency of your dough (drier dough rises slower).

Apples are in season in Autumn/Fall so it's likely that your home is a little cold when you're making this recipe. If you aren't sure where you should rest your dough, King Arthur Baking lists a few examples of warm and humid areas in a typical home.

While the dough is rising

In the meantime, I recommend preparing your cinnamon filling and chopped apples!

For the cinnamon filling, we're creaming the butter, sugar and cinnamon together and spreading this mixture on the dough. This is different from the conventional method where you spread melted butter on the dough and sprinkle on the cinnamon sugar!

I prefer creaming the filling as you won't have sugar falling out of the rolls while you assemble them! Also, when you bake the rolls, you won't have puddles of cinnamon sugar at the bottom of your tray.

However, you can still use the conventional method where you spread the melted butter and sprinkle on the sugar!

Once your dough has risen, place it on a clean floured surface. Use a rolling pin (or a large bottle) to flatten the dough into a rectangle shape about 30 x 45 cm (12 x 17 inches) large.

Spread the cinnamon-sugar mixture on the dough so it's close to the edge. Then sprinkle the apple pieces on top!

Starting from the long side, tightly roll the dough into a tube.

Then use a very sharp knife or unflavored dental floss to cut the log into around 12 vegan apple cinnamon rolls. I prefer dental floss as it is less messy! When you 'slice' your cinnamon rolls, a few apple pieces may fall out. This is absolutely fine! Just stick them back into the rolls later.

Place your vegan apple cinnamon rolls in your prepared baking dish and cover with a tea towel. Once again, allow them to rest in a warm humid spot.

The rolls are ready when they look puffy again. If you gently poke one of the rolls, it should spring back slowly.

These cinnamon rolls are ready when they're slightly golden brown which is around 20-25 minutes! If you're unsure, insert a toothpick in one of the center rolls and it shouldn't collect any wet dough.

These cinnamon rolls are lovely with either:

Can I add anything else to these vegan apple cinnamon rolls?

You can take the filling to the next level by adding:
- Ground nutmeg, ground cardamom or even ground ginger!
- Chopped pecans or walnuts
- Other fresh fruit such as blueberries or strawberries
- Raisins or sultanas. You may soak them in orange juice for extra flavor! Or check out my hot cross bun cinnamon rolls for another variation!

As mentioned before, for a custard variation of these rolls, check out my apple custard cinnamon rolls!

How can I make this recipe as quickly as possible? 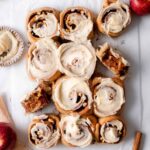