Easy vegan cinnamon quick bread made with no yeast! Fluffy, moist, tastes like cinnamon rolls and you don't need a mixer!

For a yeasted cinnamon bread, check out my vegan cinnamon babka.

Granulated sugar to sweeten the main part of the cinnamon bread. It keeps the cake part a light color so you get a nice contrast between the cake and the cinnamon swirl.

Brown sugar for the cinnamon swirl. It adds a wonderful depth of flavor and color!

Dairy-free milk. Honestly, it doesn't really matter what milk you use. You can even use water! I personally prefer soy milk, oat milk or almond milk as they make cakes a little richer.

Raising agents and vinegar (not pictured). As this cinnamon bread is eggless, we're adding a little more baking powder to help the bread rise properly. The vinegar gives the bread a more tender crumb, and replaces some of the functions of eggs.

Vanilla. Normally, vanilla is optional but I highly recommend it for this recipe as it's one of the main flavors of the cinnamon bread.

Optional: vegan butter or coconut oil if you'd like to make a crunchy streusel topping. We're combining it with a few ingredients you'll already have from the loaf.

Tips for making the batter

The cake part of this quick bread comes together in one large bowl! Just mix the dry ingredients, add the wet ingredients then mix again.

My TOP tip for the batter is to not overmix it! Just make sure there are no more streaks of flour, although some lumps are okay. However, if you can see granules of sugar in the mixed batter, fold the batter just once or twice to help them dissolve.

Cinnamon sugar is easy to make. Just mix 2 ingredients in a bowl and you're done!

The streusel topping is completely optional but levels up your vegan cinnamon quick bread. I made the streusel a little more crumbly than other streusel mixtures because it makes the baked bread easier to cut.

Tips for assembling the cinnamon bread

There are no rules for assembling this vegan cinnamon bread! You don't have to be precise and the swirl looks different in every slice and every loaf.

I love cinnamon rolls so I made this bread with two thick swirls of cinnamon sugar. To do this, I recommend:

Don't worry about getting precise amounts of cake batter and cinnamon sugar. Once I used just a few tablespoons of batter for one layer and the bread baked beautifully with obvious layers!

You also don't need to use a knife/skewer to swirl the batter and cinnamon sugar together. The gravity of the cake batter automatically gives the cinnamon sugar a swirly pattern.

The vegan cinnamon bread is amazing by itself or with the streusel topping. However, you can also top the bread with:

Coconut and/or brown sugar will work. However, it will make your bread light brown in color so the cinnamon swirl won't be as noticeable.

Unfortunately, maple syrup is too heavy for this recipe. If you'd like a refined sugar-free cinnamon bread, try using granulated stevia or erythritol.

Can I make this recipe gluten-free?

I haven't tested this cinnamon swirl bread with gluten-free flour so I'm not 100% sure. However, a good quality 1:1 gluten-free all-purpose flour may work.

Can I add anything else to this recipe?

Yes, you can add some raisins, pecans or walnuts to the cinnamon swirl layer!

Try combining the cinnamon swirl layer in this recipe with your quick bread recipe of choice. 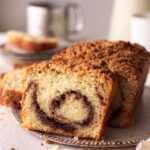 To make the bread:

To make the cinnamon swirl mixture:

Optional: To make the streusel topping:

Baking and storing the cinnamon bread: