Buttery and soft vegan cinnamon sticky buns or rolls with an irresistible maple glaze. You can make them with common ingredients you probably already have in your pantry. And this post features step-by-step pictures!

How are these sticky buns different?

Sticky buns originated in Pennsylvania in the USA. They are typically a little denser than cinnamon rolls and are drenched in a glaze and pecans.

They are normally made by pouring a glaze on the bottom of a baking pan which is then sprinkled with nuts. Cinnamon rolls go on top then it is baked. Afterward, the tray is inverted and you're greeted with traditional sticky buns!

Contrary to popular opinion, I don't think sticky buns are pretty - they are brown, squashed and lack definition. Delicious but ugly if I'm honest!

Instead of making sticky buns the traditional way, I opted for classic vegan cinnamon rolls drizzled heavily in maple glaze. I LOVE the appearance of the top of classic cinnamon rolls and knew the glaze would suit it perfectly.

Ingredients you will need for these vegan sticky buns

These homemade cinnamon rolls use common pantry staples and no weird ingredients! You will need:

I've tried a 1:1 gluten free flour substitute for these vegan sticky buns and they didn't work well. However, different brands of gluten-free flour behave differently so it might work for the brand you have. If it does, please let me know!

Instead of using plain flour for these vegan sticky buns, you can use white spelt flour or wholemeal flour. However, your buns will be denser.

If you don't want to use vegan butter or margarine, you can use oil instead. Like above, this results in a denser dough which makes it harder to knead and rise.

Making the dough for the cinnamon rolls

I love one-bowl recipes! Simply put all the dough ingredients in a stand mixer or large mixing bowl. Mix and knead until it's combined.

Your sticky bun dough should be relatively smooth, cohesive and have no pockets of butter or flour. I've tested this recipe many times but I understand that every brand of flour and plant-based milk have different absorbencies. You may need to 'eye' the dough and:

Resting the dough the first time

Place the dough for the sticky buns in a large and deep bowl and cover it with a damp tea towel. The moisture from the towel will prevent it from drying out. Don't place the dough in a small bowl where it'll rise and overflow (like the pictures below).... hahaha....

Position the bowl in a WARM spot in your house. That could be:

If it doesn't double or grow 150% in size, don't ignore it. Reposition the dough in a warmer spot and wait until it does.

How to shape the vegan cinnamon rolls

Place the risen dough on a floured surface. Then roll it into a large square or rectangle. I used a rolling pin but a round and even jar will work too :).

Once you've done that, liberally spread the vegan butter or margarine on the surface. I like spreading mine to the edges because I think the end sticky buns need a bit of love too!

Liberally sprinkle your cinnamon sugar on top. Then get your fingertips dirty and rub it in! If you don't rub it in, it'll get pretty messy when you try to roll it up.

Ok, then roll up the dough as tightly as possible. Start from the long side and, bit by bit, roll it up into a long tube!

Use a sharp knife or unflavoured dental floss to cut rolls out of the tube. I prefer to ident the tube at halfway then quarters so I get relatively even rolls. 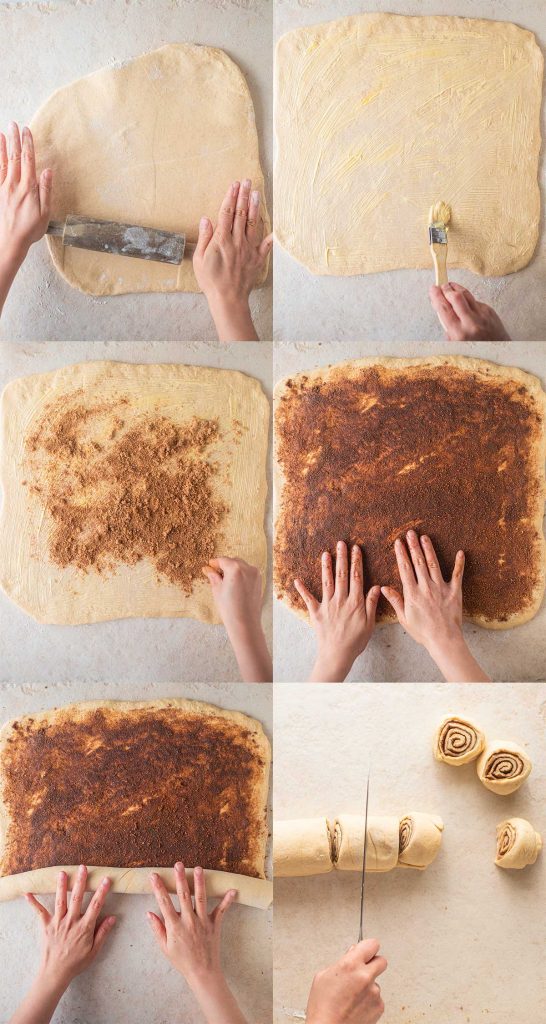 Resting the dough the second time

Since we just handled the dough for the sticky buns A LOT, it needs to rest again. It's like self-care for people - after we work, we need to look after ourselves and rest ;).

Place all the vegan cinnamon rolls in a greased baking tray. With spacing the rolls, you have two options:

Sometimes you are limited by what baking tin you have. Or you can pick which one you prefer and space your rolls accordingly!

The maple glaze for the vegan sticky buns

While the buns are baking, you can prepare the delicious glaze for your vegan sticky buns! Simply put all the ingredients into a small saucepan and heat until everything is combined and thick.

If you don't have maple syrup, you can use corn syrup or powdered sugar, but they won't taste as good ;).

Generously drizzle the glaze on top when the buns are hot from the oven. The glaze helps keep the buns moist for longer and simply irresistible. 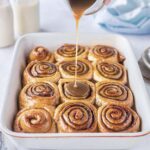 To make the buns:

To assemble the vegan sticky buns:

* Instant yeast doesn't need to be 'activated' or 'bloomed' beforehand. However, if you use active dry yeast, you'll need to use 1 ⅓ tbsp and combine it with warm milk and a pinch of sugar beforehand. Wait until it bubbles then use it in the recipe. If you use another type of yeast, you may need a different quantity. ** If your dough is too soft to be rolled, chill it in the fridge for at least 10 minutes. 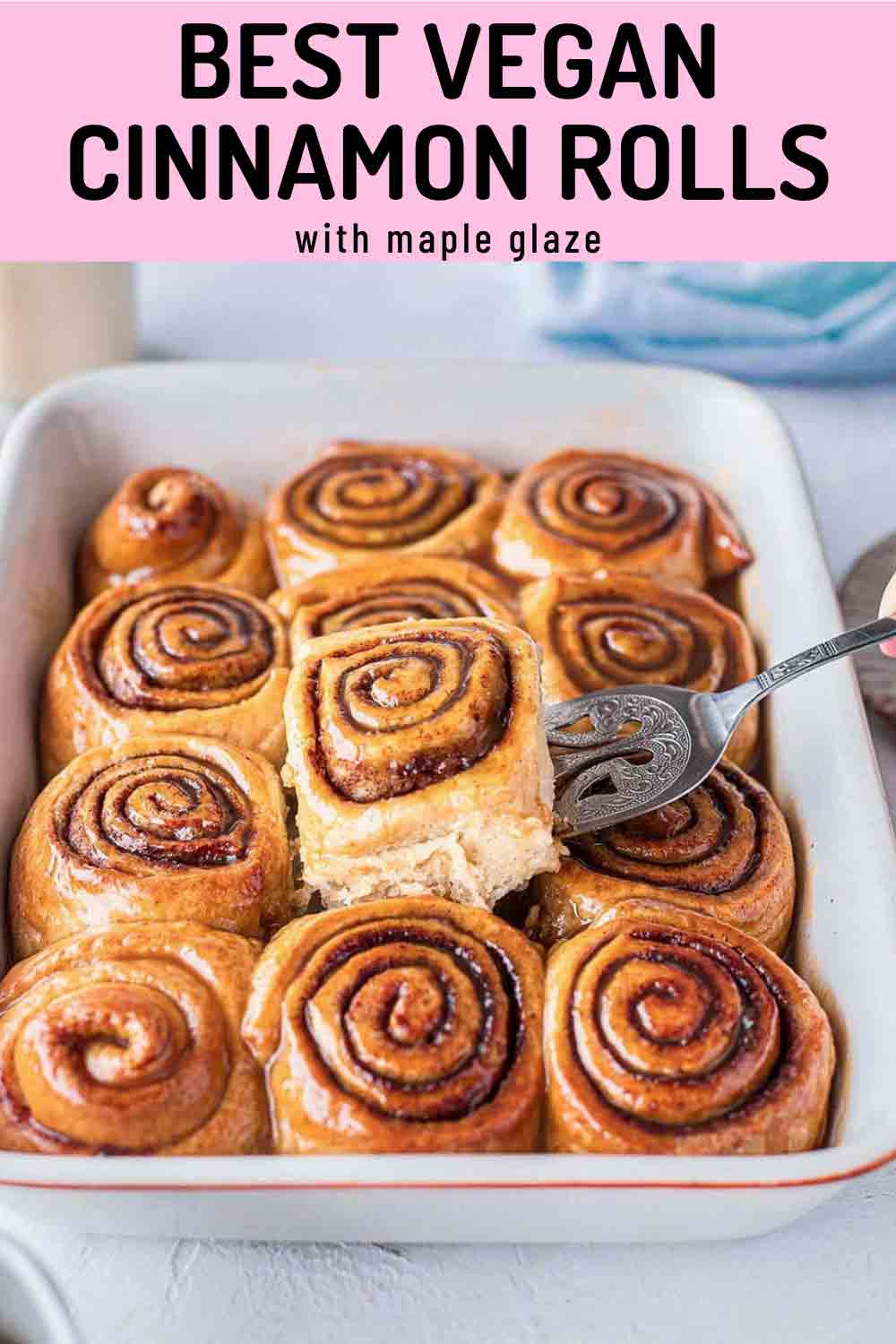