Buttery, soft and pillowy vegan cinnamon rolls with a raspberry jam donut filling. They happen to be vegan, are easy to make and have no weird ingredients!

Everyone loves classic vegan cinnamon rolls but sometimes you just want something different. The traditional fluffy dough of cinnamon rolls is the perfect base for lashings of sweet and sticky raspberry jam!

I mimicked the dough of jam donuts by adding touch of cinnamon to the cinnamon roll dough. I also made a QUICK and easy raspberry jam as the filling.

These raspberry cinnamon rolls are:

You can also make this recipe into a larger twist bread or babka!

Ingredients you need to make these EPIC jam cinnamon rolls

Like most of my recipes, I made sure these rolls used COMMON pantry staples including:

The quick jam uses only 3 ingredients:

What I LOVE about this recipe is you can put all the dough ingredients into a bowl and just mix it.

Once you have a smooth and cohesive dough, cover it with a damp tea towel and place it in a warm spot in your house.

In 1-2 hours, your dough should increase in size. Note that it doesn't neeeeed to double in size - it just needs to increase by 150%. If it doesn't grow, reposition the dough in a warmer spot in your house and wait until it does.

While your dough is resting, go ahead and make the raspberry jam!

Simply pop all ingredients into a small saucepan with a dash of water. Simmer for around 5 minutes or until the jam is nice and thick.

The thicker, the better! We don't want any of the jam seeping out when you bake the rolls. This jam also goes wonderfully with cookies, such as my mini vegan jam tarts.

If you've made cinnamon rolls before, these are no different. Or if this is your first time, it's okay I'll walk you through every step of the way!

At this stage, your dough should be soft but can be handled without drooping out of your hand. If your dough is very very soft, chill it before you do these next steps! This will just make it easier to roll and cut but will not affect the taste of the rolls.

If your dough is good to go, roll it out on a lightly floured surface. It doesn't matter if you roll it into a square or rectangle shape. If you don't have a rolling pin, you can use large glass jar for this!

Spread the thick jam on top. If your jam is thick like mine, you can spread it to the edges. I want the end pieces to still have jam on them!

From the long side, roll the dough tightly. Imagine it's like an actual jam roll, burrito, sushi... you get the point!

Then use a sharp knife to cut rolls out of the dough. I like the indent my dough at half, then quarters than rolls because it takes out the guess work. This part can be a little messy. If it's TOO messy, chill the dough in the fridge for 15 minutes then cut it again.

Pop all the rolls in a greased baking tin, cover it and let it rest for another hour or so.

When you're ready to bake them, bake then in a hot oven for 15-20 minutes! They are ready when they are golden brown on top.

Coming from Australia, I would normally call these 'jam donut cinnamon scrolls'. I think people who speak British English would call them 'scrolls' too! However, I realise most of my audience is from America and would describe these as 'cinnamon rolls' or 'cinnamon buns'.

Check out my other vegan cinnamon rolls recipes: 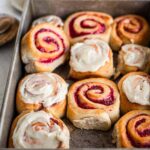 To make the rolls:

To make the jam filling

* Instant yeast doesn't need to be 'activated' or 'bloomed' beforehand. However, if you use another type of yeast, combine it with warm milk and a pinch of sugar beforehand. Wait until it bubbles then use it in the recipe. ** Alternatively, you top your rolls with additional jam. Or you can sprinkle the rolls with a donut-like cinnamon sugar. Simply combine ¼ cup (50g) with 1 tablespoon ground cinnamon and dust the mixture over the donuts *** If your dough is too soft to be rolled, chill it in the fridge for at least 10 minutes.