Pillowy, moist and tender blueberry rolls with a touch of cinnamon and a deep purple glaze. Easy to make, uses common pantry ingredients and this post includes step-by-step process photos!

If you love cinnamon rolls and blueberries, this is the perfect treat for you! These rolls have:

Ingredients for these vegan blueberry rolls

Making vegan rolls is easy! I basically used a conventional cinnamon roll recipe and made the following substitutions:

You'll need common pantry staples to make these rolls including:

How to make the dough for the blueberry rolls

I love recipes where you can chuck everything into a bowl and mix. Thankfully, this is one of those recipes!

I used 'instant yeast' which doesn't need to be activated before using it in the recipe. Just make sure your liquids (milk and butter are WARM) as they'll help the process.

So, throw everything into your stand mixer or large mixing bowl and mix until combined. Knead for about 5 minutes or until your dough is smooth and cohesive. It should be soft but come away from the side of the bowl.

Leave the dough in your bowl and cover it with a damp tea towel. The moisture from the towel prevents the dough from drying out. Leave it in a WARM spot in your home for 1 hour or until it increases in size.

How to assemble the blueberry rolls

If you've made cinnamon rolls before, these are very similar! If you haven't, let me walk you through the process.

Lightly dust a clean surface with flour and place your dough on top. Roll it out using a rolling pin, large jar or anything that's circular. You can roll it out into a rectangle or square shape - it doesn't really matter.

Spread your blueberry jam on top. Use a spatula or a big spoon so the jam is relatively even. Then, sprinkle some blueberries on top.

Starting from the long side, carefully and tightly roll up the dough into a tube. Pretend it's like sushi or a burrito! These rolls are more difficult to roll than traditional cinnamon rolls. The jam is slippery and makes things more fiddly. However, it doesn't really matter at the end!

When cutting the rolls, I'd highly recommend indenting the 'half way' and 'quarter' points. This helps you to cut more even rolls!

To cut the rolls, you can use either use a very sharp knife or unflavoured dental floss.

If you would like neat rolls, you may need to wipe your knife or floss between each cut.

Now that you've sliced all the rolls, place them in a greased baking tin with a little space in between them. Cover the rolls with a damp tea towel, place them in a WARM spot and allow them to rise for the second time.

The rolls will increase in size and become puffy again. If they don't become puffy, place the rolls in a warmer spot and be patient!

After the second rise, bake the rolls in the oven! This is when your home will smell AMAZING!

Drizzle the remaining blueberry glaze on the rolls then ENJOY!

Side note: Are they scrolls, rolls or buns?!

Check out my other vegan cinnamon roll type recipes: 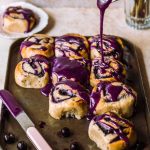 *Instant yeast doesn't need to be 'activated' or 'bloomed' beforehand. However, if you use another type of yeast, combine it with warm milk and a pinch of sugar beforehand. Wait until it bubbles then use it in the recipe. ** If desired, brush the rolls with any type of jam. This makes the rolls shiny and locks some of the moisture in.
Did you make this recipe?Tag @rainbownourishments and use the hashtag #rainbownourishments on Instagram! 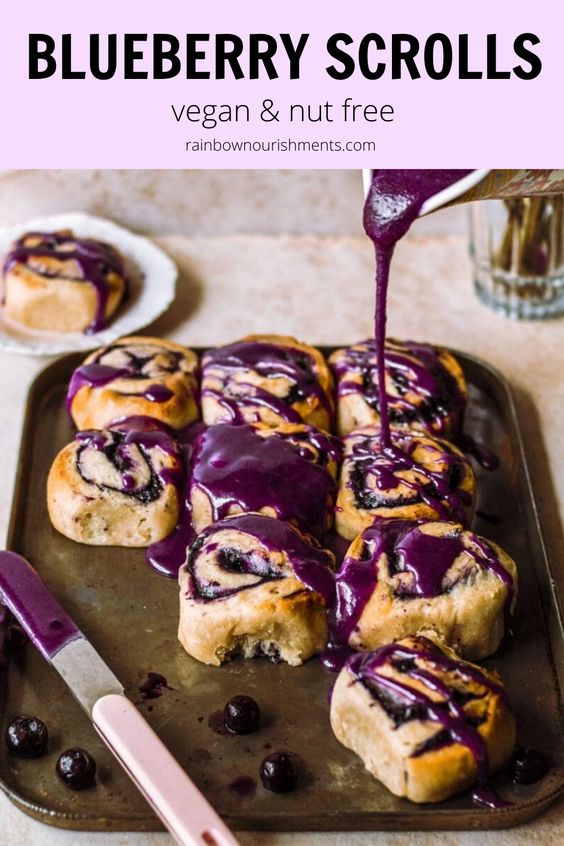