These vegan pumpkin cinnamon rolls are incredibly soft and fluffy, and are loaded with pumpkin flavor and pumpkin spice. Topped with a soft cream cheese icing, these are perfect for breakfast or brunch!

Why you'll love this recipe

TASTE/TEXTURE: These vegan pumpkin cinnamon rolls are softer and more pillowy than regular cinnamon rolls! You can space them apart to get crusty edges or place them close together for even more plush cinnamon rolls.

DIFFICULTY: These are as easy to make as any cinnamon roll recipe! The dough comes together in one bowl and the hardest thing is waiting for them to rise.

OCCASION: They're perfect with a cup of coffee or tea in Fall/Autumn!

If you're after a quicker breakfast or dessert, see my pumpkin chocolate chip cookies, pumpkin coffee cake or cinnamon quick bread.

Pumpkin puree either canned or homemade. This recipe works well with either! To make your own pumpkin puree, I've listed instructions at the end of this blog post.

Vegan block butter. Alternatively, you may use spreadable vegan margarine, though your dough may need a little more flour. Softened coconut oil will also work however, I recommend adding a generous pinch of salt to mimic the flavor of butter.

Non-dairy milk. I prefer using creamy flavorful milk such as soy, oat or almond milk. However, any type of milk will work.

Pecans or walnuts to add flavor and texture to the filling. Or you can simply omit them.

Instant yeast. This is the quickest and easiest yeast as it doesn't need to be proofed beforehand. Alternatively, you may use active dry yeast (or another type), if you proof it in warm milk beforehand.

Tips for making the dough

You can use a stand mixer or a large mixing bowl to prepare the dough for the pumpkin spice cinnamon rolls.

If you're using a stand mixer, attach the dough hook and knead the dough for 5-10 minutes or until the dough is soft and stretchy.

If you're making the dough by hand, mix all the ingredients in a large bowl using a wooden spoon. Turn out your dough place the dough mixture on a floured surface and knead for around 10 minutes or until the dough is soft and smooth.

As mentioned before, the dough is packed with pumpkin puree so it's a little softer than the dough of plain vegan cinnamon rolls. However, like all yeasted dough, the longer you knead it, the less sticky it'll become. After some time, if your dough is still sticky, add a little flour and continue to knead.

First rise for your dough

The key to resting your dough is making sure it's in a WARM spot in your home!

According to King Arthur Baking, the ideal temperature for yeasted dough is between 75°F to 78°F (23°C to 25°C). My home is often colder so I make sure the dough is resting in the kitchen or near a heater.

The colder your home is, the longer dough will take to rise. The exception is if you're resting the dough in the fridge overnight!

The dough is ready when it's roughly doubled in size. If you gently poke the dough, it should spring back slowly.

Tips for assembling your cinnamon rolls

To roll out your dough, I suggest using a rolling pin or a large jar. The dough needs to be shaped into a large rectangle shape, or thereabouts!

When rolling your dough into a log, try to roll it as tightly as possible.

To cut your rolls, I recommend using unflavored dental floss because it's easier and doesn't squish your cinnamon rolls! Alternatively, you can use a very sharp knife :).

Similar to the first rise, you'll need to rest your cinnamon rolls again. They're ready to bake when they puff up again.

I baked the cinnamon rolls in 9 x 13 inch pan for the rolls below however you can use any large baking pan. I've also baked this recipe in an 11 x 6 inch pan and round baking dish and got taller cinnamon rolls with less 'crusty edges.'

Your cinnamon rolls are fully baked when you can insert a toothpick in one of the middle rolls and it doesn't collect any raw dough. Alternatively, they're ready if:

These vegan pumpkin cinnamon rolls are wonderful when topped with:

Prepare them the night before to serve at breakfast or enjoy them for dessert!

How to make cinnamon rolls in advance

When preparing these pumpkin cinnamon rolls, you can refrigerate them at either of the following stages:

How do I make pumpkin puree at home?

If baking:
1. Preheat your oven to 180°C (350°F).
2. Cut your pumpkin in half and discard the seeds.
3. Place the pumpkin, flesh side down on the baking tray.
4. Bake the pumpkin until it's fork-tender. This can take anywhere between 30 minutes to 1 hour.
5. When the pumpkin has cooled, scoop out the flesh and blend until smooth.

Can I freeze these cinnamon rolls?

Like all bread recipes, cinnamon rolls are best enjoyed the day they're baked.

However, according to Prepared Cooks, when cinnamon rolls are frozen the right way, they can be stored for up to 4 months! They recommend wrapping the rolls in plastic or aluminum foil and sealing them in an airtight container to freeze.

Can I use sourdough starter instead of yeast?

Yes, just like my vegan sourdough cinnamon roll recipe, I recommend using around ½ cup (100g) of an active sourdough starter with 100% hydration instead of the yeast. Reduce the milk in the recipe to 3 tablespoons (45g) and add more milk if needed. 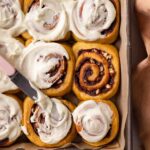 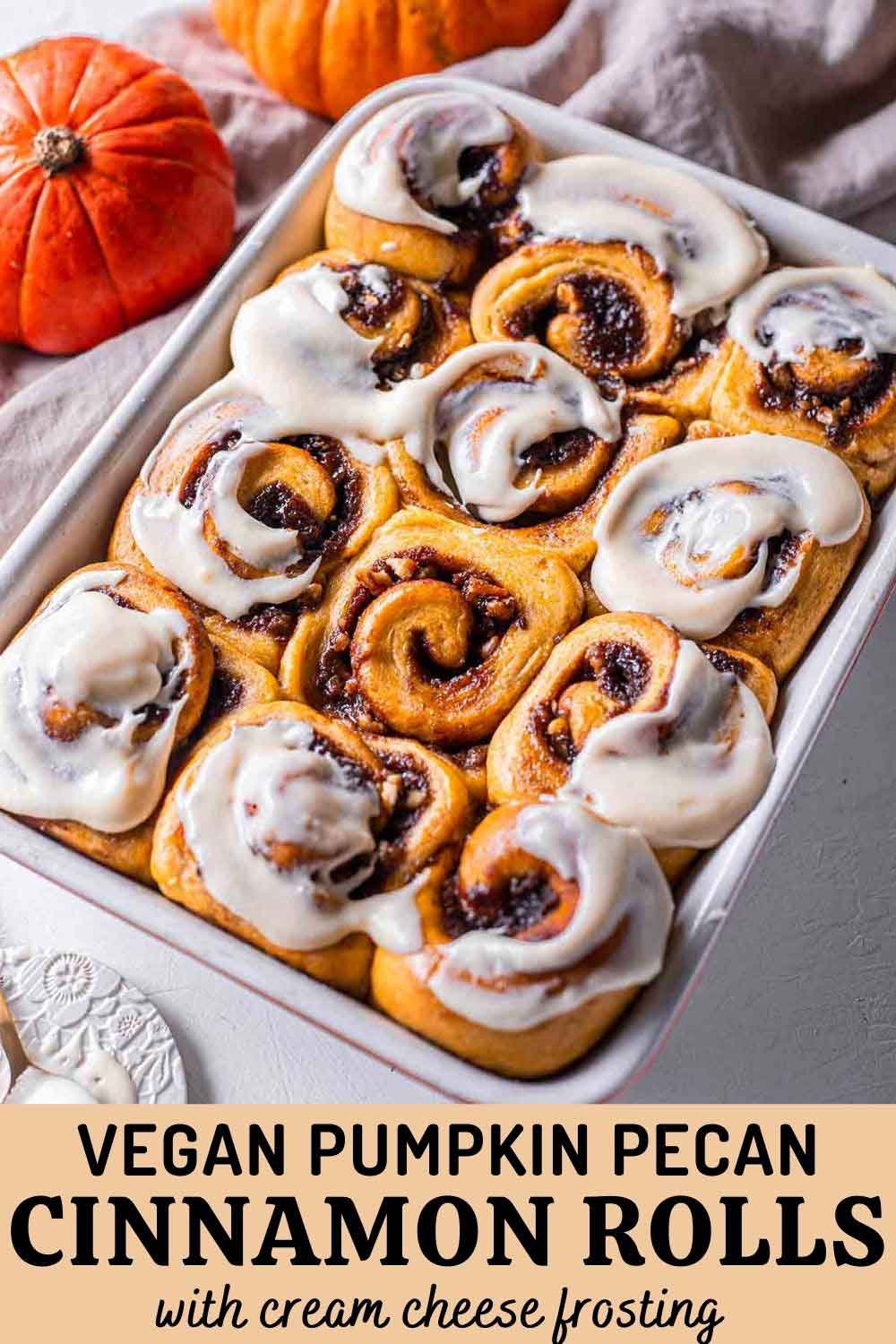