These vegan sourdough cinnamon rolls have the same flakiness as your classic cinnamon rolls but are slightly less sweet. The fermented sourdough starter adds a subtle tang, which makes it hard to stop at one bite!

If you're new to sourdough baking, my favourite ways to create a sourdough starter are:

To keep your sourdough alive, you need to feed it (just like a baby or a plant)!

The Perfect Loaf explains how to feed your starter in some detail. Normally, you need to discard the majority of your bubbly starter every day or every few days, mix in some flour and water and repeat until you need to bake with it. When I first got my starter, I did this for about 1 week, got fed up with it then researched simplier and less time-consuming methods.

Instead, the 'scrapings method' is 100 times easier and you only need to feed your starter the day before you use it! Watch Bake with Jack's Scrapings Method video for a straight-forward explanation.

Ingredients for these sourdough cinnamon scrolls

To make the dough for the rolls, you only need five ingredients including:

For more 'wholesome' rolls, you can substitute the plain flour for spelt or whole wheat flour. The rolls won't be as fluffy but you'll get more fibre in your body!

Making the dough for the sourdough cinnamon rolls

These are the easiest sourdough cinnamon rolls! To make the dough, add ALL the ingredients to a stand mixer or large bowl then mix or knead it for a few minutes. This activates the gluten and allows it to be soft and stretchy.

Initially, the dough will look shabby and have pockets of flour or milk. However, just keep kneading until it forms a smooth and cohesive dough! The dough will eventually come away from the side of the bowl.

Kneading using a stand mixer will take ~5 minutes whereas kneading by hand will take 10+ minutes. Consider it a free arm workout :).

Place the dough in a bowl, cover it with a tea towel and place it in a warm area. In an hour or so, the dough should increase in size.

From the angle of these pictures, you can't see the dough doubling in size, but I promise it did! It may not have 'doubled' in size because it's cold where I am right now but I know they'll increase in size later.

In this step, the sourdough starter in these cinnamon rolls are being fed with more flour which allows them to grow!

How to assemble sourdough cinnamon rolls

If you’ve made cinnamon rolls before, these are a breeze to make. But if this is your first time, don’t fear!

On a floured surface, use a rolling pin (or jar) to flatten the dough into a rectanglar shape.

Brush the dough with your melted butter and liberally sprinkle on the cinnamon sugar. This is the most delicious part! Rub in the sugar so it doesn't go everywhere when you roll up the dough.

To roll the dough for the sourdough cinnamon rolls, imagine it is like a jam roll but FIRMER. Try to make sure there are no gaps when you roll the dough. I like using both hands so both ends of the dough are rolled evenly.

I prefer cutting the dough with a very sharp knife or unflavoured dental floss. Some people use a serrated knife, though this doesn't work for me.

If your cinnamon rolls are squished when you cut them, simply reshape them with your hands…. or don’t, it won’t hurt either way!

Arrange your sourdough cinnamon rolls in a baking dish and let it rest for the second time. Even though these vegan cinnamon rolls are without yeast, they will still rise! You can rest them for 1 hour or overnight in the fridge.

Just make sure you bring them back to room temperature before you bake them :).

The recipe includes a basic vanilla frosting flavoured with MAPLE syrup because it's delicious!

However, If you prefer refined sugar-free cinnamon rolls, eat them without frosting or drizzle them with only maple syrup. 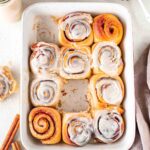 To make the cinnamon roll dough

To prepare the cinnamon filling:

* My sourdough starter had 100% hydration. Any amount of starter between 75-150g will work. Use less for a mild sourdough taste and more starter for a stronger sourdough taste. ** If you can't find vegan cream cheese, sub the frosting with a simple maple sugar frosting. Mix 2 cups (200g) powdered sugar, a dash of plant-based milk, a dash of maple syrup and vanilla until combined.

This recipe and post was originally published in March 2019 and updated in May 2020. 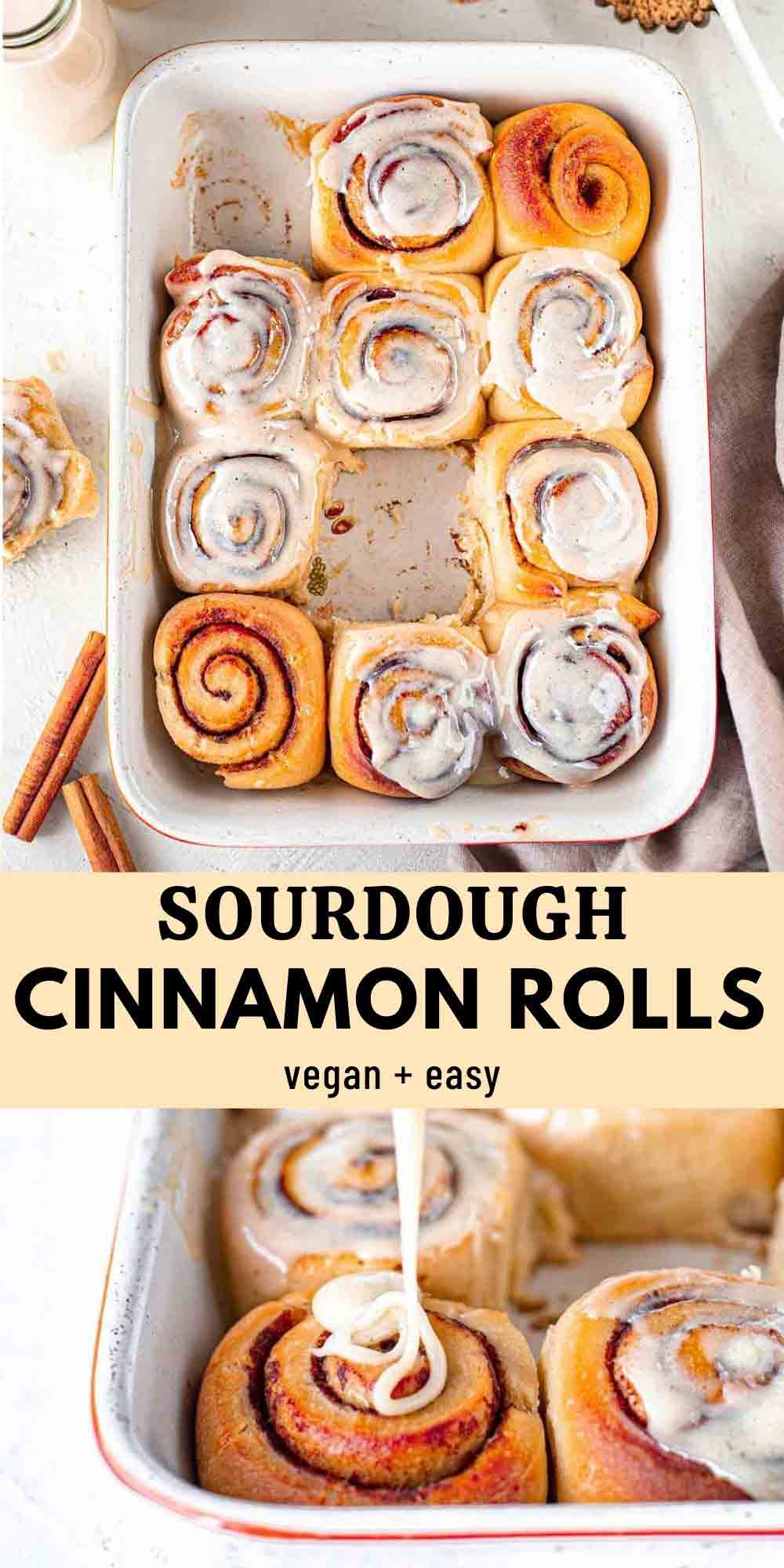