Vegan Cinnamon Babka, a fluffy buttery brioche-like dough with swirls of caramelized cinnamon. This babka is easy to make with the help of step-by-step pictures in the below post!

This buttery twist bread is prepared like vegan cinnamon rolls but it is shaped and twisted into a loaf.

Alternatively, for a quicker vegan cinnamon bread, check out my cinnamon quick bread.

Ingredients for the vegan cinnamon babka

First, we need some pretty simple ingredients including:

Do I need to activate instant quick yeast before using it?

Instant quick yeast does NOT need to be activated before baking with it. This is according to the instructions on my packet of yeast, Serious Eats, The Kitchn and many more.

I keep my yeast in my fridge all year long and this prolongs its shelf life... I've used refrigerated yeast up to 1 year past its use by date and it's worked perfectly ;).

If you use another type of yeast, I'd strongly recommend googling the conversion as most other types cannot be used as a 1:1 substitution!

After you've kneaded all the dough ingredients, pop it in a floured or greased bowl and allow it to double in size.

Depending on the climate of your home (temperature and humidity), it can take 1 hour up to a few hours for the dough to double. If it's taking longer than expected, reposition the dough in a warmer spot.

The vegan cinnamon babka dough is 'enriched' with butter and this inhibits the dough from rising as quickly as other bread doughs. If you make sure the dough is in a WARM spot, the butter will be soft and the dough is encouraged to rise!

You can place the dough in an airtight container in the fridge and allow it to rise overnight. It might not double in size this way but if you let it come back to room temperature afterwards, it'll eventually get there.

Making the filling for the vegan cinnamon babka

Unlike some vegan cinnamon rolls, we need to combine melted butter with the sugar and cinnamon to make a paste for the filling. Having too much butter (or too much filling) will drown the babka. As much as I looove cinnamon, we don't really want this!

In the recipe card at the bottom of the post, you'll find my 'tried and tested' cinnamon babka filling ratio.

Now for the fun and messy part! Similar to cinnamon rolls, we need to roll out the dough on a floured surface and spread the cinnamon filling on it.

From the long size, roll up the dough to make a log! Try to use two hands to roll the dough up as tightly as possible.

Once you have a 'log' of dough, slice it lengthways using the sharpest knife you have. You'll then have two strands of dough with an exposed cinnamon filling

I accidentally made my vegan cinnamon babka MUCH longer than my loaf tin. To fit it in, I 'compressed' the length of my babka then squashed it into my 20 cm loaf tin.

Second rise for the babka

All the hard work is done at this stage! Allow your babka to rest for the second time. It should rise just a little, say by 20%.

This step can also be done in the fridge overnight! I'd recommend sprinkling a little water on the babka before you cover it and let it rise. The water will prevent the babka from drying out.

To prevent this baked bread from drying out, I strongly recommend creating a simple sugar glaze (sugar and water) and pouring it over your babka when it's hot from the oven.

The sugar glaze gives your vegan cinnamon babka a beautiful and shiny exterior and traps in the moisture from baking. The glaze also adds plenty of moisture to your babka and makes it less likely to dry out!

Check out my other vegan babka recipes:

Or see my vegan bread recipes: 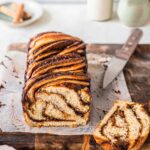 To make the babka dough:

To make the cinnamon filling:

Sugar glaze (make this while your babka is baking): 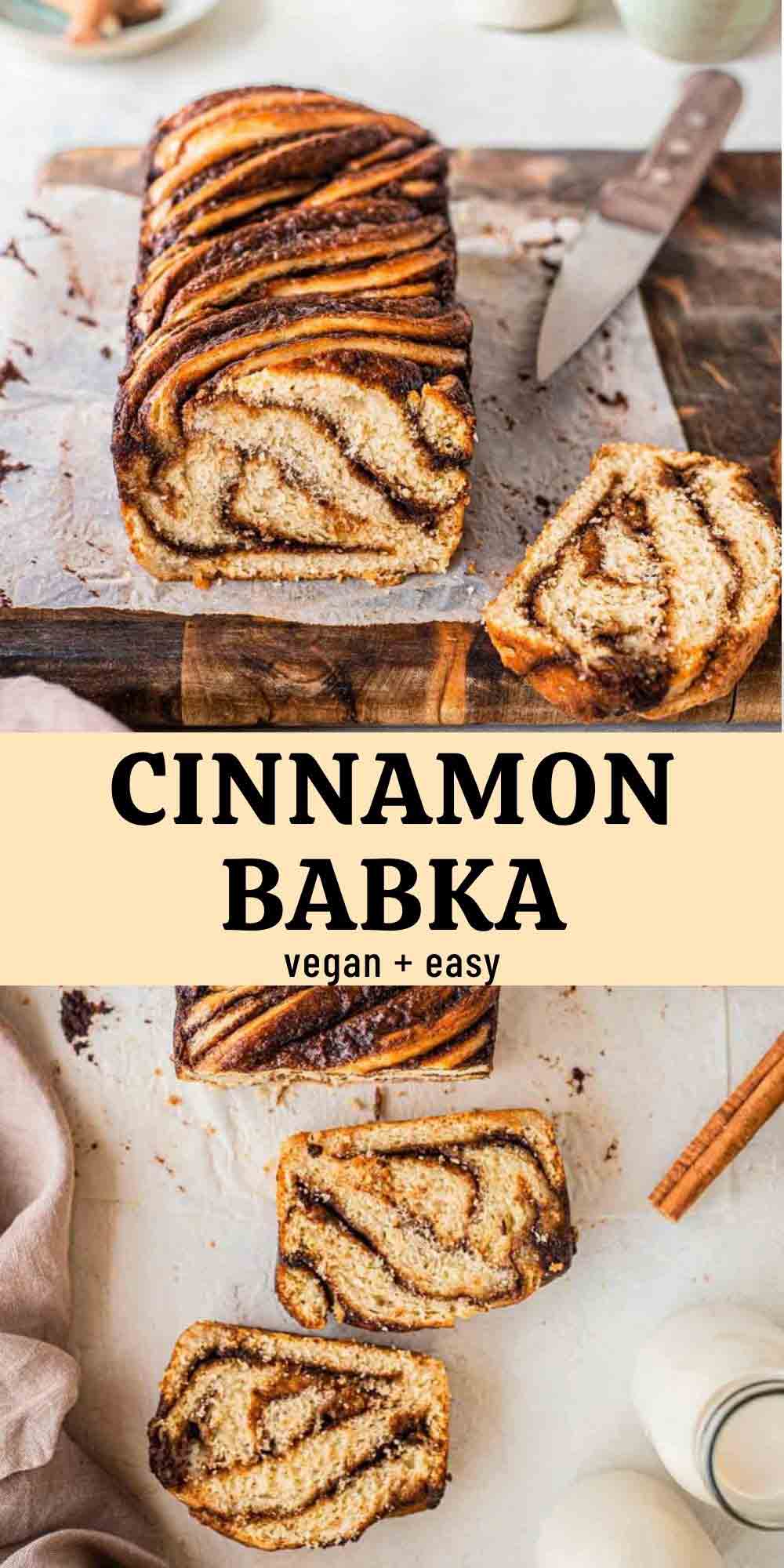