What to expect from these berry cinnamon rolls

These are like vegan cinnamon buns but with a thick berry jam and a slightly different rolling method. The brioche dough is partially 'laminated' with the berry jam. This makes a BEAUTIFUL and mesmerising roll with more layers than a conventional vegan cinnamon roll!

These laminated rolls are also slightly more dense and have a crunchier exterior than cinnamon rolls. However, being able to tear away more layers makes them fun to eat!

I got the inspiration for these buns from Anna Banana who made some gorgeous hazelnut swirl buns which I fell in love with at first sight. The process was similar to my vegan rugelach so I knew it'd be easy to make!

However, if you're looking for simplier and fluffier vegan berry buns, check out my blueberry cinnamon rolls.

Ingredients for the vegan brioche dough

The dough is essentially a variation of my vegan brioche and cinnamon bun dough and consists of:

The filling is store-bought fruit conserve and blueberries which I reduced on the stove-top. Reducing the jam/conserve makes it easier to roll and prevents it from spilling everywhere when baking it. In the below picture, you can see that the jam is VERY thick.

You can really use any jam to make these. I have used blackcurrant and raspberry which work really well! A lighter-colour jam like apricot will also work but the swirls won't be as obvious.

How to assemble berry rolls

After you've made your dough and let it rise once, roll it on a floured surface.

At the next few stages, it helps to think of the dough in 3 parts - the LEFT side, MIDDLE and RIGHT side. Spread the thick jam on two thirds of the dough. This can be the left and middle OR right and middle. It doesn't matter!

Tip: don't spread the jam to the edges like what I did... when I folded it, the jam oozed out everywhere and it was quite.... messy!

Once the jam is on two-thirds of your dough, fold over the side of the dough which has no jam on it.

Then fold over the other side. This will give you an 'envelope' or 'pocket' of jammy dough!

With your envelope/pocket, carefully roll out the dough into a rectangular shape again. This step can be a little messy if your jam isn't thick enough or you spread the jam to the edges of your dough.

Next, get a sharp knife or pizza cutter and cut 2cm or 1 inch strips out of the dough.

Then roll each strip into a berry roll! The rolls are bigger than conventional cinnamon buns, but I ain't complaining!

Place all the berry rolls on a lined baking tray then set aside in a warm spot until they increase in size.

Baking and decorating the berry rolls

I made a simple berry glaze using powdered/icing sugar, jam and mylk. However, the glaze is totally optional!

Try my other vegan bread recipes 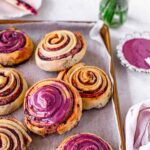 To make the buns:

To assemble the buns:

* Instant yeast doesn't need to be 'activated' or 'bloomed' beforehand. However, if you use another type of yeast, combine it with warm milk and a pinch of sugar beforehand. Wait until it bubbles then use it in the recipe. ** If your dough is too soft to be rolled, chill it in the fridge for at least 10 minutes.