Flaky vegan chocolate rugelach, a delicate pastry which is a lot easier to make than it looks! I’ve included step-by-step pictures of how to make rugelach.

Rugelach is a crescent-shaped pastry often pronounced as ‘ru-ger-lark’ or ‘ru-ger-lac’. Even though it has a similar appearance to croissants, its texture is more dense. Rugelach seems to have origins in Jewish culture in Europe, particularly Eastern Europe. These days it’s very common in Israel (where I tried it) and in the American Jewish communities. In Australia, I personally haven’t seen it in shops but my partner (who is half Eastern European) says he grew up with it!

There are two main versions of rugelach: a yeasted version and a biscuit version. Both usually have a crescent-like shape and filled with chocolate, jams, poppy seeds or nuts. This recipe is for the yeasted version! When I visited Israel in early 2020 with Vibe Israel, the yeasted rugelach was more popular.

Rugelach can vary so much but this recipe is:

What ingredients are in this vegan chocolate rugelach? 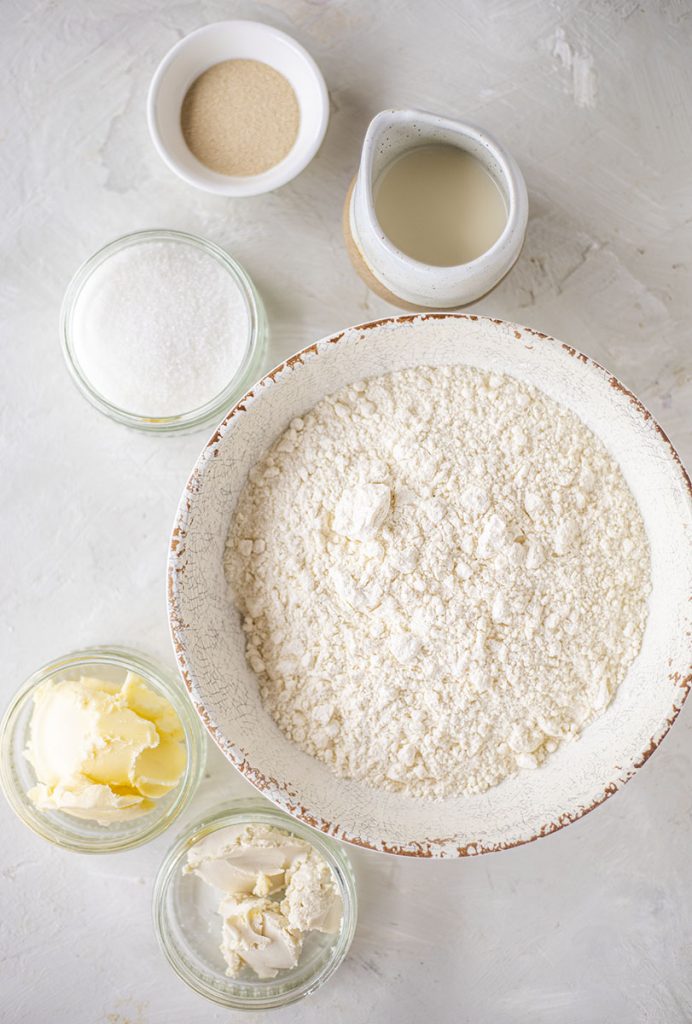 The milk, butter and cream cheese are vegan of course! The ratios are the same as my jam donut babka but I replaced half the butter with cream cheese to make the rugelach richer and more like pastry. New York’s Breads Bakery uses babka dough as the base of their rugelach – I haven’t tried their version but in order to create a flaky pastry, I did the same for this! Plus, if you already know a recipe works, stick with it!

Adding cream cheese to the rugelach dough seems to be an Americanisation of the traditional pastry and a common practice in the Western world. People who grew up with rugelach may think it’s a little odd to have cream cheese in the recipe. However, I think it’s similar to how pizza in Italy is very different from pizza in other countries. Or vegan sushi in Japan is nothing like vegan sushi around the world!

If you don’t have all the ingredients at home or you have particular dietary preferences, here are possible substitutions:

How to make chocolate rugelach: Method 1

This first method of making chocolate rugelach is easy, quick and results in a slightly layered pastry.

Once you’ve made and rested your dough, you’ll need to shape it! Roll out the dough into a circular shape (like a pizza). Make sure you roll the dough as thinly as possible as it’ll give you pastry more delicious layers. Spread your chocolate ganache to the edges, cut the dough into segments then roll it up from the edge to make little ‘snails’.

These vegan chocolate rugelach look elegant, cute and didn’t need much effort! Place them on a lined baking tray and let them rest – you’ve worked them hard and you’ve worked hard yourself! 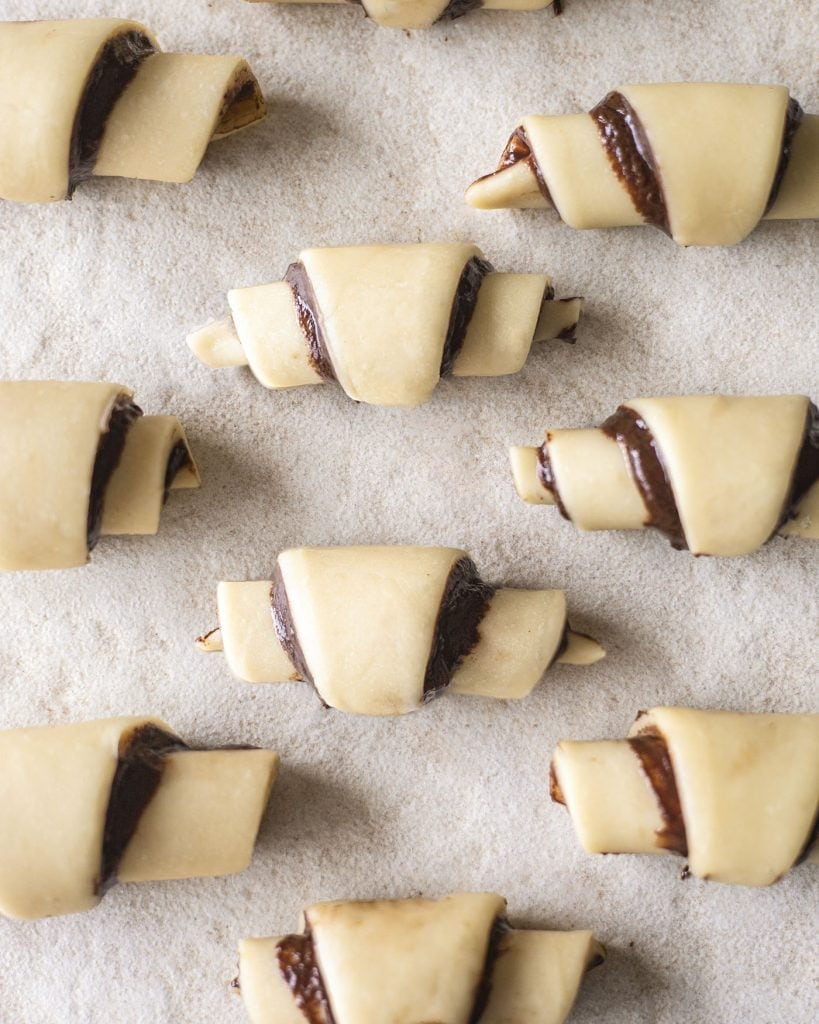 How to make chocolate rugelach: Method 2

The second and more lengthy way of making vegan rugelach is where you ‘laminate’ or fold layers of chocolate into the dough. It’s easy but just takes a bit of time – here are pictures to walk you through the process.

Roll the dough into a long rectangular shape and spread some of the ganache on the bottom two-thirds of the dough. Fold down the top third of dough and cold up the bottom third. You’ll eventually have a ‘parcel’ which needs to be placed in the fridge to rest and chill.

After it’s rested, flatten/roll the dough into a long rectangular shape again. Your dough may quite firm at this stage so consider the rolling free exercise!

Repeat the steps above (spread chocolate ganache on two thirds of the dough and fold). Set aside and chill the dough.

Once you’ve done that, you need to:

Laminating the dough results in a super flaky pastry with LOTS of layers! I’m always up for short cuts BUT the second method is well worth the patience and hard work! The pastry is soo much more fun and delicious to eat :). 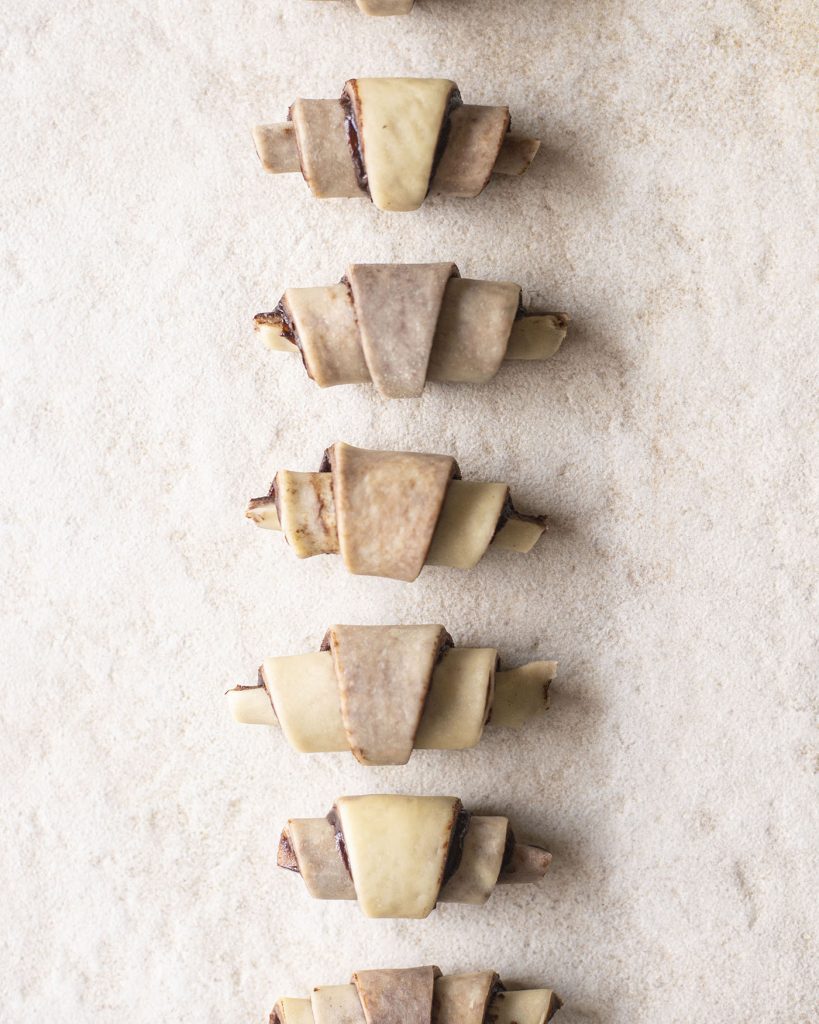 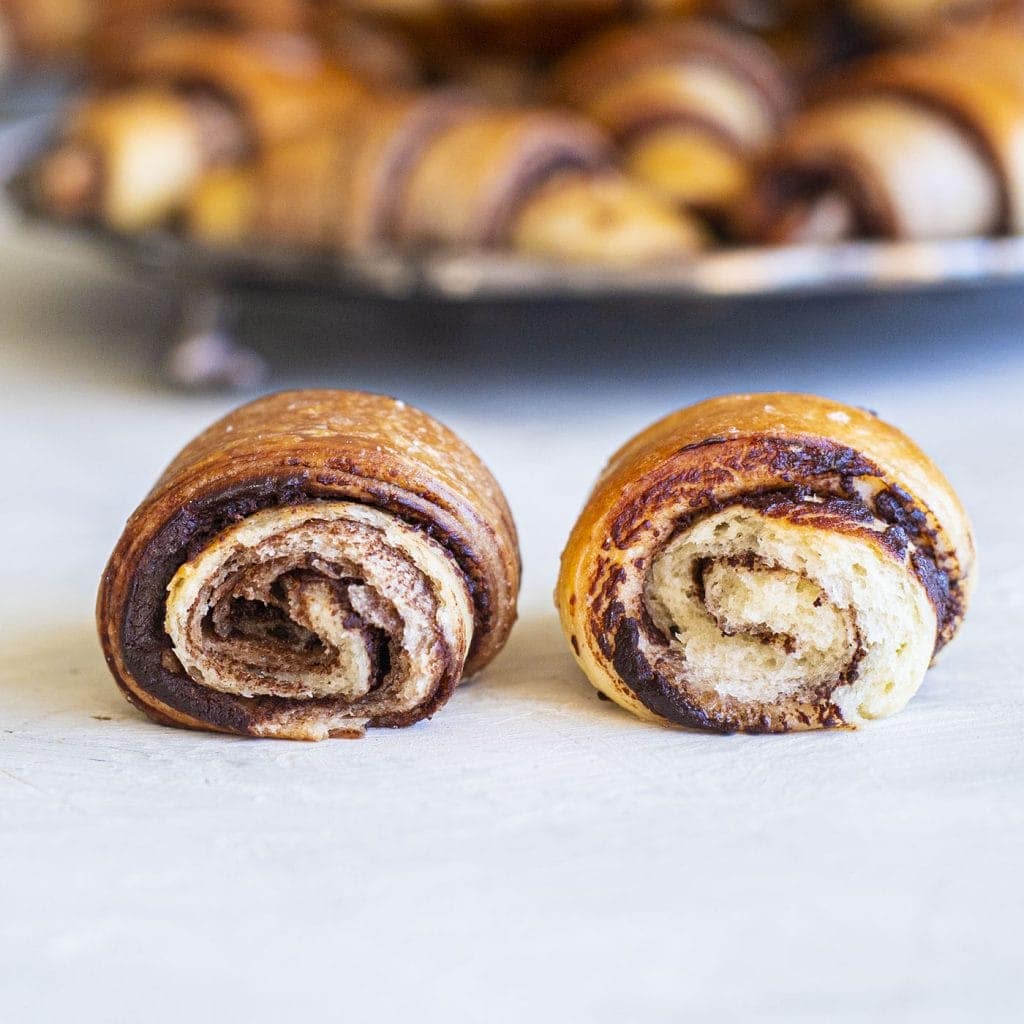 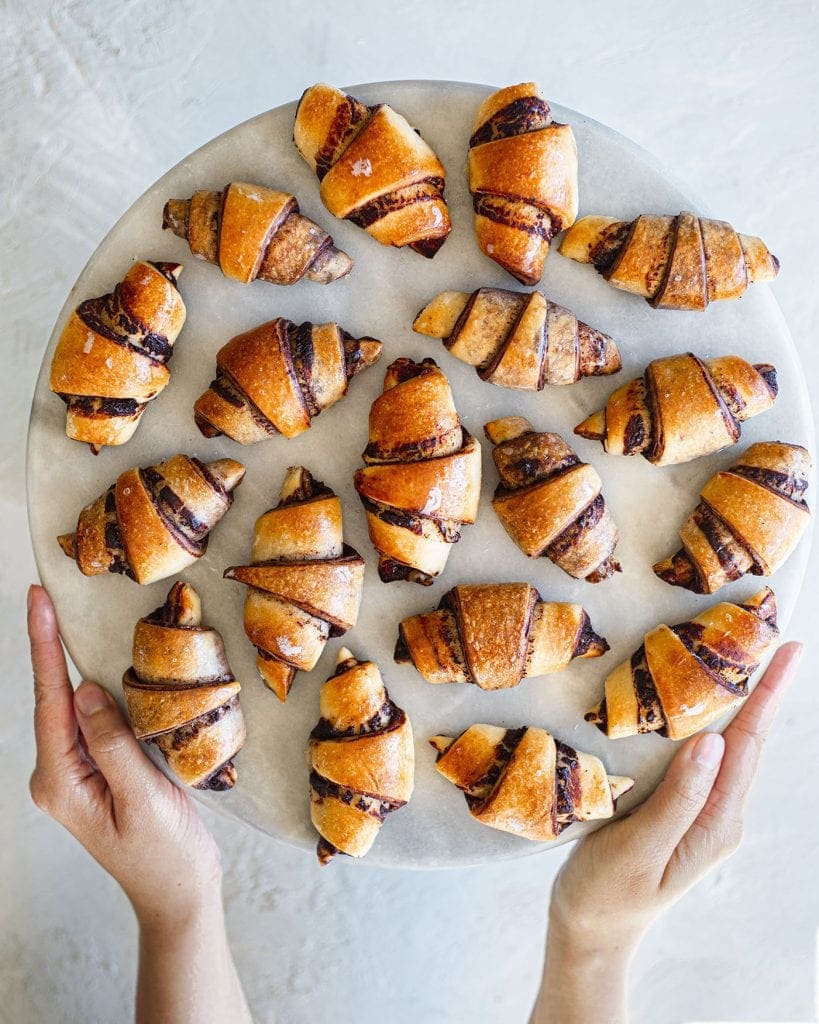 * You should be able to substitute a light-flavoured oil for butter. I haven't tried oil with this exact recipe but I've used it in brioche which has a similar ingredient ratio to the rugelach dough. ** I used Miyoko's Plain Cultured Cream Cheese. You can substitute this for butter or a light-flavoured oil. *** Instant yeast doesn't need to be 'activated' or 'bloomed' beforehand. However, if you use another type of yeast, combine it with warm milk and a pinch of sugar beforehand. Wait until it bubbles then use it in the recipe.
Did you make this recipe?Tag @rainbownourishments and hashtag it #rainbownourishments on Instagram!