When I owned a cake business and provided treats to cafes all around Canberra, we'd make batches of these vegan raspberry slice every fortnight! This recipe is quite similar to what we used to make and sell. They are:

Is this a raw vegan recipe?

These vegan raspberry bounty bars are no bake but technically not raw. I used roasted almonds instead of raw because I prefer their flavour. I also reduced the raspberries on the stovetop to intensify their flavour.

If you want a 100% raw vegan slice (or what Americans call raw vegan bar), I'd recommend you:

How to make this vegan raspberry slice

Unlike baked vegan sponge cakes, unbaked slices are usually fool-proof and super easy to make! You don't have to worry about the cake collapsing, not cooking properly or not rising.

For this vegan raspberry bounty bar, all you need to do is:

One of the MOST frequent questions I get about no bake desserts is: 'How do you get those insanely 'perfect' and even layers'?

My secret is using a flexible cake scraper to flatten each layer! It has more surface area than a spoon or spatula or most kitchen items. Unlike a metal cake scraper, a silicone or plastic cake scraper has more leeway (so it won't just push your layers everywhere) and is easier to use.

I swear by my Loyal cake scraper (Australian brand) as my family has used Loyal in our house and in commercial cooking for decades. However, this cake scraper on Amazon seems similar.

Also, when you press your fillings into the tin, I'd recommend you press them in as FIRMLY as possible. Any gaps or wholes will be a structural weak point and will crumble when you cut into your raw vegan bar.

To get a very smooth ganache layer, make sure it's evenly and well melted. Pour it into your cake tin then IMMEDIATELY swivel the ganache around the cake tin. This forces the ganache to reach all corners of the tin. If you let the ganache cool too quickly, it'll be hard to spread!

The best way I can describe the 'swivel' action is.... it's like when you used to play portable pinball-like games when you were young and you wanted the ball to fall down a particular hole... See, playing games back them DO come in handy!

How to neatly cut an no bake slice or bar

Now that we've put in all that time and effort into making the slice (okay, only 20 minutes), we don't want to mess it up when cutting it, you know?!

I've cut thousands of slices and raw vegan cheesecakes over the years and my top tips for neat slices are:

Tip 1: Make sure the slice is very cold before you slice it. The more firm the layers are, the less they are likely to crumble.

Tip 2: Use the sharpest knife you have! I used my Global Chef Knife which I sharpened before I cut into this unbaked slice.

Tip 3: Wipe down your knife between each cut. After you make one cut, your knife will probably have crumbs and chocolate on it. If you don't wipe it down, the crumbs will appear on top of your next slice.

An *advanced* tip for neat slices

It helps if the knife is hot/ warm but dry. The heat from the knife creates a neater cut and just makes it easier to cut through it. However, it should be dry to avoid any smudging between the laters.

You can make your knife's blade hot/warm by running it under hot water (or dipping it into a tall jar of water) then drying it with a tea towel. Or you can use a blow torch to warm up the blade of your knife.

I hope you love these raspberry bounty bars!

Check out my other raw vegan or no bake vegan recipes: 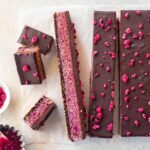