Raw vegan lamingtons which taste just like the classic lamington! An aerated cashew 'sponge' covered in chocolate ganache and coconut with a cashew cream and raspberry chia jam filling.

To be honest, I never really understood why a food blogger or anyone on social media would say that they are excited to bring their readers a recipe. But after I made these raw vegan lamingtons, I finally got it!

I took one bite into a lamington and my eyes rolled to the back of my head. I wish someone else was there to enjoy them with me... or laugh at my weird facial expression. I'm sharing this recipe with you so you can enjoy them too!

Even though I made these lamingtons from scratch, I can't believe that they are vegan, made of wholefood ingredients and are (mostly) raw. They are fluffy, have a good amount of chocolate on them and are covered in crisp coconut. The jam and cream in the middle just make you want more.

But how can something raw be fluffy? The coconut oil in the desiccated coconut and coconut cream in the 'sponge' stabilizes the other ingredients. With the help of a food processor or just enough hand-mixing, the coconut oil solidifies and keeps the ground cashews aerated. The 'sponge' mixture is reminiscent of a friand, which makes it so much fancier and delicious than conventional lamingtons.

I hope this recipe brings you as much joy as it did for meeee! 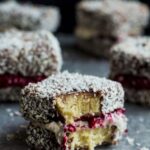 To prepare the 'sponge':

To make the raspberry chia jam:

To make the cashew cream:

To make the coating:

Tip 1: Make sure you get coconut cream that has no additives such as guar gum, agar or emulsifiers. The night before you make the lamingtons, put your can(s) of coconut cream in the fridge. When you measure the coconut cream, only use the thick part of coconut cream that's formed at the top of the can.
Tip 2: A quicker way to coat and decorate the lamingtons is to spread the jam and cream on the sponge slabs in Step 1 of 'To assemble'. Then sandwich the slabs together, cut them into pieces then dip each 'sandwich' in chocolate and coconut.