Chinese egg tarts are one of the most popular traditional Chinese desserts. They are enjoyed all year round but especially on Chinese New Year. Egg tarts often accompany other treats at yum cha and in Chinese bakeries.

Traditionally, egg tarts are made with lard and a ton of eggs so are definitely not vegan.

This recipe is based on a traditional egg tart recipe

I wanted to make vegan egg custard tarts which were as authentic as possible so I adapted a recipe which was passed down to my mother.

The original recipe is MUCH better than the ones you get from Chinese bakery, such as Maxim's. The home-made tarts are more buttery, full of flavour and aromatic. My mum and all her Chinese mother friends thought so too (the ultimate test)!

To keep the authenticity of this popular Chinese dessert, I used proper substitutions of the original ingredients.

I replaced conventional butter with vegan block butter, milk powder with coconut milk powder etc. To make up for the lack of egg, I changed the ratios in the recipe and added a few ingredients!

Some Hong Kong style egg custard tarts have a shortcrust pastry similar to British custard tarts. Other egg tarts use a Chinese laminated pastry which is more time-consuming (and I personally never liked).

Traditionally the pastry for egg tarts is made with lard so aren't even vegetarian friendly! These days, bakeries use lard, shortening or butter (probably lard or shortening to due cost effectiveness).

When you make egg tarts at home using butter, they will always be more rich than the ones you get in your bakery.

To make the buttery shortcrust, you will need:

How to make the pastry for these vegan egg tarts

Making the Chinese style shortcrust pastry is the same as making conventional pastry!

Simply pop all the ingredients in a food processor. Add a teaspoon of water, soy milk or evaporated milk (which you'll also need for the custard) and pulse until combined.

Do NOT skip the teaspoon of water/milk. It is needed to hydrate the flour and sugar and to bind them together. Once, I skipped it and my pastry was very crumbly!

If your pastry is very soft, chill it until it firms up.

On a floured surface, roll out your pastry to a little less than 5 mm (¼ inch) thick. I found that made a good pastry to custard ratio :). Use a cookie cutter slightly larger than your egg tart tins and cut out some rounds of pastry!

Transfer each pastry round to a greased tart tin and press it against the bottom and sides. I won't lie - shaping each vegan egg tart is the most tedious step in this recipe. However, it will be worth it!

With traditional Chinese egg tarts, a raw pastry shell is filled with raw custard then baked in the oven. However, vegan custard doesn't bake as easily so we need to bake the tart shells beforehand!

It's not 100% necessary to blind bake your vegan egg tart shells. However, I strongly recommend it. I always take shortcuts with baking but this is something I wouldn't skip!

As you can see below, when the pastry is not blind baked the pastry puffs up. The pastry can expand to double its size and overpower the custard filling.

When the pastry is blind baked, it stays compact, firm and maintains its shape.

Larger pastry shells for tarts/pies can be blind baked by topping it with baking paper and pie weights. However, these egg tarts are small and fiddly so I wanted to figure an easier way!

Ingredients for the vegan egg custard

This Chinese dessert has a SILKY smooth custard which melts in your mouth. To make the custard, we need a few ingredients:

First, I'd recommend mixing your custard powder with a few tablespoons of soy milk. Custard powder can clump up easily but this can be prevented by mixing it beforehand! Then simply add all the custard ingredients to a medium saucepan and place over medium-high heat.

Bring the custard to a gentle boil for about 5 minutes. It should thicken ever so slightly! This means the custard powder and agar is activated and will help everything set :).

Either way, pour your hot custard into a jug with a pouring spout. Pour your custard in your baked tart shells then chill the vegan egg tarts for a 2-3 hours or until set.

Removing the tarts from the shells and serving

If you greased your egg tart tins properly, your vegan egg tarts will pop right out. If not, you may need to stick a knife or skewer in the sides to coax it out.

These egg tarts can be kept at room temperature for a few hours. The pastry and custard may become a little softer but will still be pleasant to eat!

If you want to see any particular vegan Chinese dessert recipes, let me know in the comments below :).

For other vegan tart recipes, see: 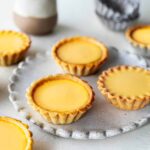