Who would like a no-churn ice cream bursting with the nuttiness from peanut butter, fruitiness from blueberries and the crunch and chewiness of sourdough french toast? It's vegan, dairy free, kid-friendly and could be made nut-free if you use sunflower seed butter!

It's freezing in Canberra, Australia at the moment but I'm often craving the texture of ice cream and smoothies (and I know many of my social media friends in the Southern Hemipshere are the same). However, many of my friends in the Northern Hemisphere are experiencing the opposite and consuming ice cream and icy things at the same rate of an IV drip. Basically, there is always a time for ice cream anywhere in the world!

Many vegan ice creams require churning for it to be smooth, creamy and not icy. However I totally get that not all of us has an ice cream churner and often just want a recipe where we can mix, stir and put it in the freezer. Many recipes also require you to defrost your ice cream after you take it out of the freezer... but the ice cream often does not defrost evenly and you're eating a smooth ice cream mixed with rock-hard blocks.

To prevent vegan ice cream from freezing into an edible solid mass, you basically need ingredients that don't freeze 100%, including things that are high in sugar or fat. In the wholefoods world, this includes nut butters, tahini and dates! Using a combination of these ingredients and other flavourings results in a decadent and creamy ice cream that you can eat straight from the freezer.

To make things interesting, I wanted to add some texture to the ice cream by incorporating a simple version of sourdough french toast. I is soaked in a date liquid, dusted with cinnamon, baked to make the edges crispy and mixed into the ice cream!

Sourdough is perfect for thsi recipe as it doesn't soak in much ice cream and stayed chewy and crispy when mixed in. There are no short cuts there so this ice cream is practically healthy, right?!

Feel free to experiment with some flavour combos :). I've tried almond butter instead of peanut butter and added cacao powder to it for a chocolatey twist. 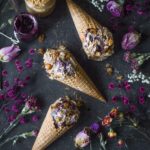