My favourite thing for breakfast is waffles, pancakes and granola. They are basically dessert-like things which are socially acceptable breakfast meals haha! For my most recent birthday, my partner got me a silicone waffle mould. I'm always SO excited to see waffles on cafe menus but I don't want to buy a big waffle machine as it'll take up unnecessary space in my already packed kitchen. Plus, waffle machines can usually only be used for a few years before the non-stick coating wears off. The silicone waffle mould was the perfect answer! The $7 investment was well worth it as I've had waffles every second day in the last couple of months.

Since baked waffles were becoming a staple in my diet, I wanted to make them healthy and super easy to make. Porridge or oatmeal is normally on rotation for my Wintery breakfasts so I decided to blend those ingredients and bake it. And the result was fabulous!

I didn't have to use an egg replacer as rolled oats naturally stick together. However, I used baking powder to give the waffles a cakey texture!

When you need to remove the waffles from the mould, it's best to peel away the mold rather than the actual waffle. That's a bonus of using a silicon mould!

The extra 5 minutes of baking is essential as it allows the indented side of the waffle to become crispy.

I don't like to put any sweeteners in the waffles. Instead, I douse it with maple syrup and fruit!

For some of my other breakfast recipes, check out:

If you try this recipe, I would love to hear about it! Comment below and rate it as it would really help us and other readers! If you post it on social media, tag @rainbownourishments and #rainbownourishments. 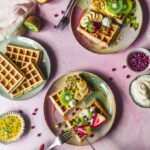