Vegan sweet potato cake with an addictive cinnamon swirl, baked as a beautiful bundt. The cake is drizzled with cashew cream and topped with dessert-like sweet potato crisps.

This cake. Having your first bite is like a warm comforting hug on a cold harsh Winter day. We all need some kindness in our lives, don't we?!

This vegan sweet potato cake is:

The sponge has an amazing texture. It is moist, slightly dense and breaks apart in your mouth. Then you get sweet caramel bits of the cinnamon swirl which makes you crave more!

The neutral cashew cream balances out the sweet potato and caramel tones of the cake.

I swear by using unrefined coconut sugar for baking fluffy sponge cakes. I love liquid sweeteners such as maple syrup but such sweeteners have a high water content so tend to weigh down sponge cakes.

Coconut sugar imparts a light caramel tone on a cake so complements flavours such as chocolate, sweet potato, pumpkin and cinnamon!

In Australia, we are lucky to have CSR Caster Sugar which is processed without animal bone char. This is unlike sugar in many other countries where animal bone char is used to whiten sugar! 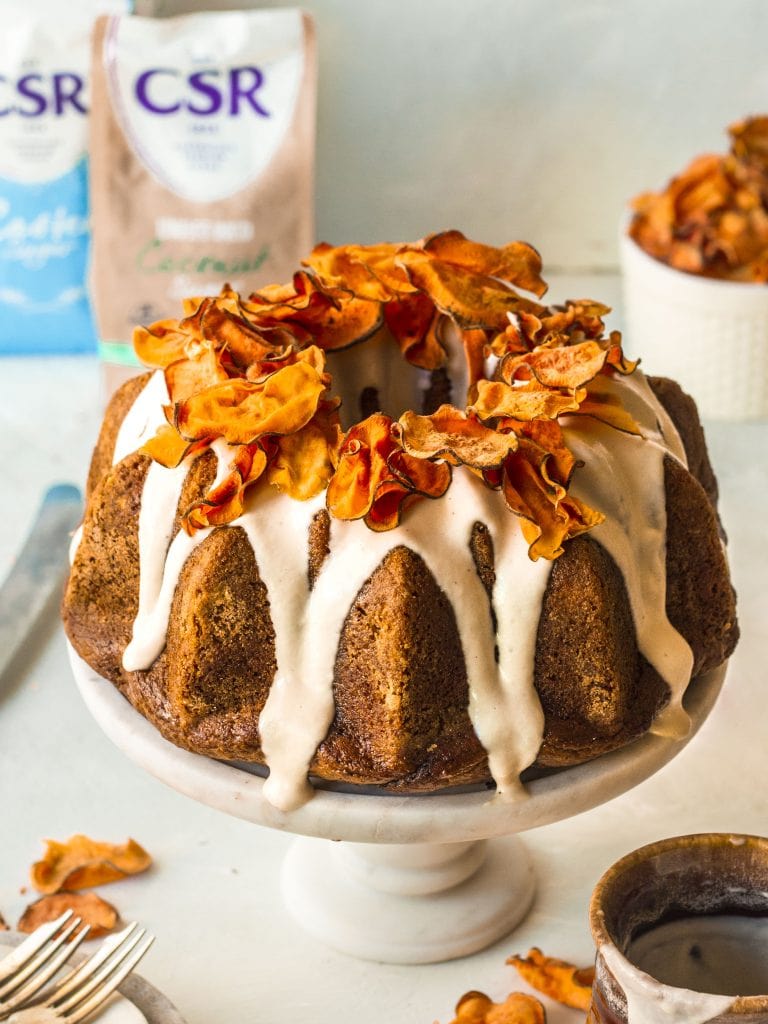 The ingredients in this vegan sweet potato cake

I selected ingredients to create a cake which was fluffy but slightly dense. Sweet potato is very starchy so tends make cakes chewy and dense! I definitely didn't want that!

To create a beautiful crumb and counteract the sweet potato, I used:

I didn't need to add any egg replacers in this cake because the starch in the sweet potato acts like a natural egg replacer!

How to make the sweet potato crisps

I had an extra sweet potato so made crisps to decorate the cake! Trust that I would top a cake with potato crisps/chips.... I used a mandolin slicer to slice the potato into really thin 3mm slices then dehydrated them in the oven for 2 hours.

At first, I arranged the potato slices making sure they didn't overlap each other. However, as the sweet potato dried up, I scrunched them together to make aesthetically pleasing shapes (pictured).

Feel like baking something slightly different? Check out my other recipes: